The high-voltage of the TPPACs, Ion Chamber, the CRDCs, FP Scintillator, and Hodoscope are remotely controlled via GUI control panel (see figure below). The GUI can be opened from the desktop of the u6pc5 control computer. This application allows also to set a maximum limit in the detector current. The voltages of these detectors depend on the Z of the fragments to be measured and their energy. The figure below shows the HV GUI during experiment e10002, which used Si-26 and Al-25 fragments at around 115 MeV/u. These voltages can be used as a reference before starting an experiment. However, the final values will have to be modified during the beam tuning in order to optimize the performance of the detectors. It is convenient to verify the reference values with D. Bazin. 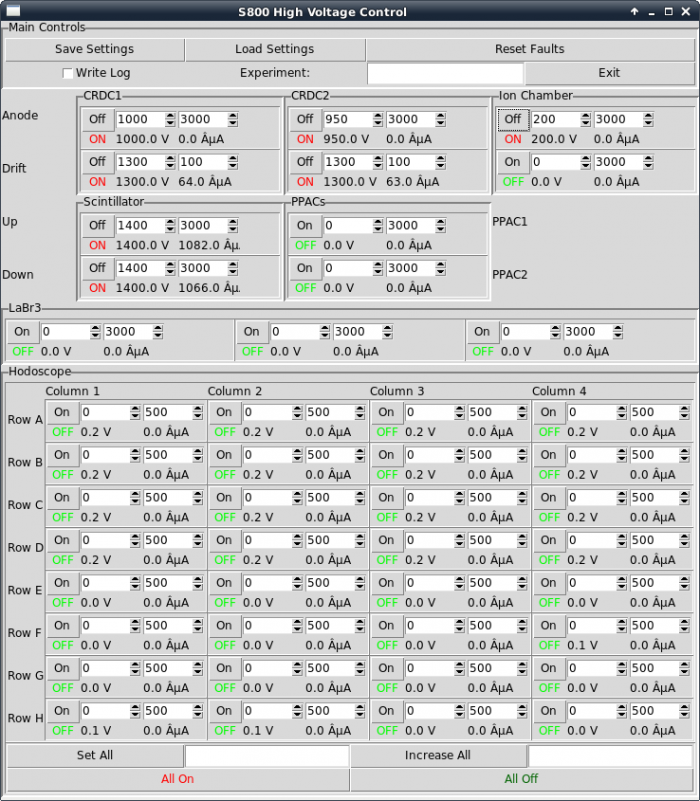 TPPACs, the Ion Chamber, and the CRDCs have ISEG power supplies run through a single VME-based bias control. The computer interface for this bias control – the S800 Detector HV Control – is typically run on the devop1 computer in data-U6 and is started by clicking on S800 HV under the Operations option on the taskbar. The Object scintillator and the FP Scintillator are each controlled separately as described below under the sections for each detector.

Apart from the detectors listed above, the voltages of the object scintillator and the electrostatic gate of the CRDCs are adjusted manually.

The bias for the object scintillator is controlled via the H.V. power supply Canberra model 3002 D located in the crate to the right of the data-U6 (see figure below). The voltage will be adjusted at the beginning of the experiment. This scintillator has to be turned off or put on “standby” when entering the vault due to its sensitivity to light.

In order for the CRDCs to work, it is necessary to bias their electrostatic gate. This is done via the H.V. Tennelec power supply located on the left side of the object-scintillator Canberra power supply (see figure below). 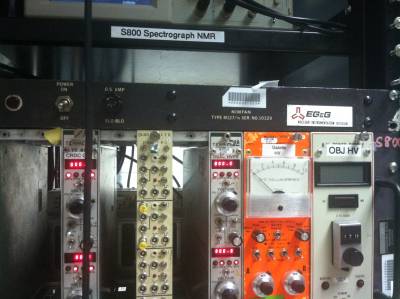