In knockout reactions, a nucleon is removed from the projectile nucleus upon peripheral collision with a light reaction target (typically 9Be). The momentum of the knocked-out nucleon and that of the final residue are related by momentum conservation. With the S800 spectrograph the reaction products behind the reaction target can be identified and the longitudinal momentum distribution of the residue of interest can be measured. The shape of this momentum distribution depends on the total angular momentum of the removed nucleon and can serve to assign the l value involved. Gamma-ray spectroscopy in coincidence with the detection of knockout residues has been successfully employed in the past to identify the final state and to determine the cross section for the population of individual excited states in this reaction mechanism. 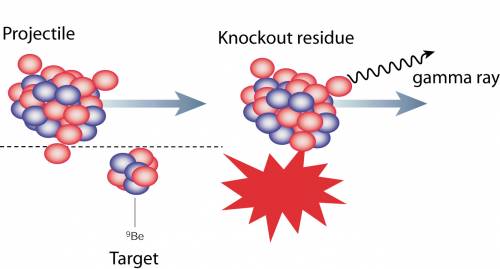 This technique has been used to investigate the nuclear structure of halo nuclei, to pinpoint the breakdown of shell closures for nuclei with extreme ratios N/Z, and to determine spectroscopic factors (occupation number of single-particle states) for weakly-bound, well-bound and deeply-bound systems in different mass regions.

Recently, the two-proton knockout on neutron-rich nuclei has been proven to be direct and thus being a new tool for the investigation of the single-particle structure of nuclei even further away from stability.

Coulomb excitation is a well established and widely used experimental technique to explore nuclear structure especially under the aspect of quadrupole collectivity. In the dawn of this method stable target nuclei were excited in the Coulomb field of impinging stable heavy-ion beams at “safe” sub-barrier energies. In the last decade properties of nuclei beyond the valley of beta stability merged into the focus of nuclear structure research. The availability of high-energy exotic beams produced in projectile fragmentation prompted the development of “intermediate-energy Coulomb excitation” as probe to investigate hardly accessible nuclear species very far from stability. In inverse kinematics exotic nuclei are scattered off stable high-Z targets and are detected in coincidence with gamma rays tagging the inelastic process. 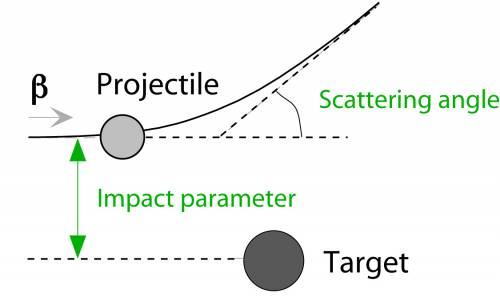 While beam energies below the Coulomb barrier prevent nuclear contributions to the excitation process, peripheral collisions have to selected in the regime of intermediate-energy Coulomb excitation to ensure the dominance of the electromagnetic interaction. This can be accomplished by restricting the analysis to events at extremly forward scattering angles, corresponding to large impact parameters.

The S800 spectrograph has been successfully used in the past to determine the scattering angle of the particles after the interaction with the target on an event-by-event basis. This allows to analyze the Coulomb excitation at various impact parameters selected offline by applying a software gate on the corresponding scattering angle.