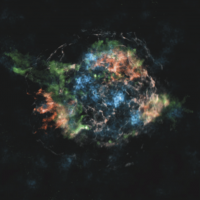 Where $\tau$ is the free-fall timescale. This leads to temperature and density trajectories: