As a starting point, we will ask every group of students to write a program (in the language of their choice) solving the Hartree-Fock equations in the spherical harmonic oscillator basis. To facilitate benchmarks, we chose to focus on systems of neutrons that are confined in a harmonic trap and are interacting via a schematic potential called the Minnesota potential. Spherical symmetry will be assumed throughout. Even this simplified system may require a significant effort, so we tried to make your life a little easier.

And of course, we will be around to help you, so don't hesitate to ask if you have questions.

In a first step, we will solve the HF equations for the system of N neutrons in a trap interacting with the Minnesota potential in a restricted basis consisting of only l=0 states. This simplifies tremendously the calculation of two-body matrix elements. We broke down the problem into several simple steps that are explained in this document.

Now that each group (hopefully) has a working HF code for the truncated S-wave model space model, we are ready to attack the general case. Since the generation of two-body matrix elements (TBMEs) is tedious for the general case, we have uploaded a F90 pack to do this for you, see here. We will give more explanations on how to use the code in the lectures. Finally, the following document outlines how the HF equations look in spherical symmetry for general model spaces, hf_fullspherical.pdf. We give below a description of what is contained in the files.

where $\pi$ is the parity. In each case, the a, b, c, d numbers refer to the counters listed in the single-particle files.

3) Possible Extensions for Week 3 and Later

Upon completion, the (full) HF code that you have developed can be used to explore various other approximations to the many-body problem. The figure below shows some of the possible extensions, and how one could piece them together (like Lego pieces, ideally). 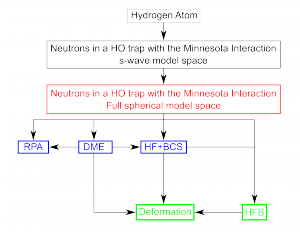