Extract a Lagrangian profile from the blast wave simulation and use the network to calculate the nucleosynthesis.

The plan: First use the Lane-Emden equation to model the density distribution. Use this as input for XNet and evolve at the right temperature for the initial NSE stage.

Modify VH1 for Lagrangian dynamics, then apply the Sedov blast on the initial density distribution (from the same solution to the Lane-Emden equation). This solution will then be used as input to XNet, using a 150 element network.

Interesting outputs: Abundance of elements as a function of time, and after the blast, as a function of radius. It is intended that this will be displayed in video form. Another output of interest is the total energy released/required in nucleosynthesis - is this energy significant enough to effect the hydrodynamics? To what extent?

Parameters for the Lane-Emden Equation: 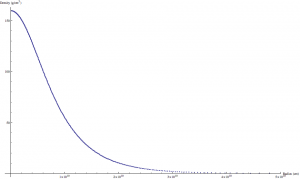 ppmlr.f90 needs to be modified so that once the Lagrange step was taken, the values needed to not be put back onto the Eulerian grid.

VH1 outputs NaN's when the simulation is run in CGS units. Presumably, this is because it is programmed using floats rather than double precision numbers, and the separation in numbers results in problematic subtractive cancellation. To fix this problem, we re-defined our units of mass and radius to be those of solar mass and solar radius. The following led to successful simulations.

To modify XNet to output 150 nuclei in the plaintext file. (Instead of trying to read in the fortran binary files in python, which is in principle also possible.) You need to change:

As usual, all the code is in the github.

2/6/14 3pm KJC: Lane-Emden Equation: We solved this in Mathematica, because, well, it only takes two lines. Far more lines to actually give a good output for FORTRAN, but that's ok. The notebook may be found on the git here. Output is three columns - radius (cm), density (g/cm^3) and pressure (dyn/cm^2). A sample output is in the github

2/6/14 4pm KJC: JGL Got VH1 up and running for the Sedov blast as written for the problems done last week. We now have to combine the solution from the Mathematica output into the VH1 scripts. SR is working on this.

2/6/14 4pm JGL: Have netCDF installed correctly, and compiled serial version of VH1 using a modified makefile (github upload to follow). The vh1-serial code outputs an *.nc file, also installed ncview to view this file. With this, we can view the 2D Sod tube solution via the convenient ncview program. For the starter version, I added a python script written by Nathan Parzuchowski to animate the 1D Sedov blast solution by turning each time step data file into a frame for the animation. We will probably stick with 1D solutions, since we want to do our final simulation with the Lagrangian remap which is supposedly more well behaved in 1D. The python script requires python-numpy and python-matplotlib.

3/6/14 6pm JGL: Today JGL and SR worked on getting the Lagrange remap up and running. The ppmlr.f90 needed to be modified so that once the Lagrange step was taken, the values needed to not be put back onto the Eulerian grid. First we removed the “wiggle” part of the file that adds dissipation for carbuncular noise. Since this is only really a problem in higher dimension, we removed this for simplicity. Next, we updated the grid using the Lagrange step, however, the code began taking extremely small time steps (on the order of 10^-7) so the simulation got nowhere. However, when we put back in the final “remap” call, the code seemed to start working as intended. We are not entirely sure what this call does that fixes everything, but now we have ran the Sedov blast using both Eulerian and Lagrangian coordinates, and both achieve the same physics, but the Lagrangian coordinates resolves the sharp blast wave better. The exact changes to the code can be found on our github.

5/6/2014: KJC: Implemented a python script for plotting nucleosynthesis on a chart of the isotopes from XNet output. Animation requires animation.FuncAnimation(), a function that proved rather non-trivial to implement. If you want to do this, make sure your first timestep doesn't have identical values. No idea why this matters, but hey. Code is on the github and is called plotchart.py. Here's a screen shot of the animation. We need to write out more isotopes from XNet before this will look really interesting. 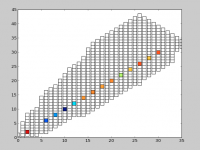 Modified plotchart.py to allow as many isotopes to be plotted as are in the network you're interested in. The script now outputs an .mp4 file for display. 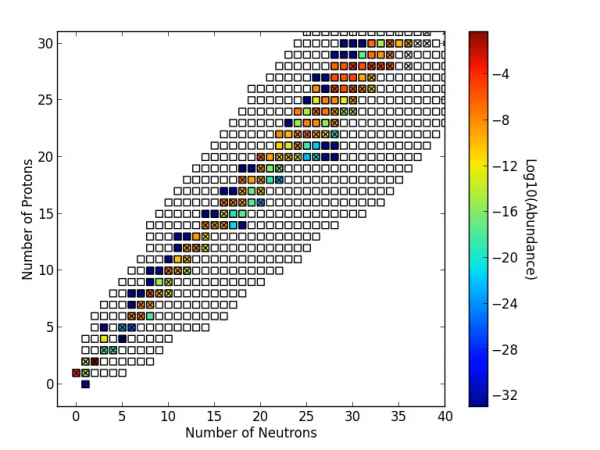 On that note, we have also made scripts for plotting abundances as a function of time (plot.gnu): 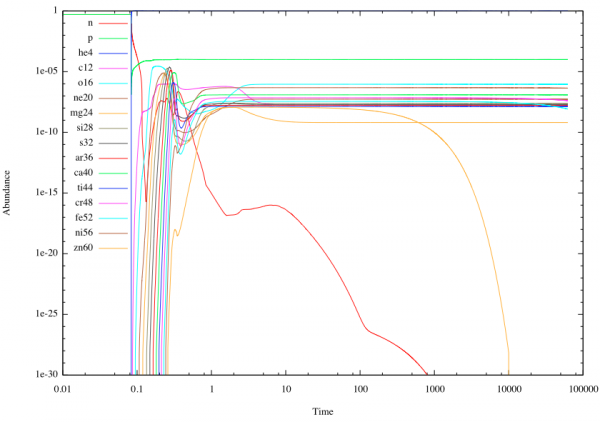 And the final abundances at the end of the simulation (plotabundancesfinal.py): 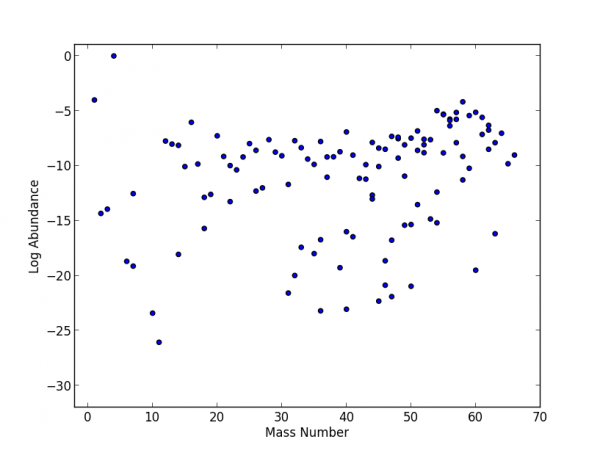 Meanwhile, JGL wrote a python script for taking outputs from VH1 and passing them into the XNet input file. SR continues to work on the units. It seems that we have used the wrong expression for pressure.

We successfully simulated the nucleosynthesis occurring in a 1 solar mass polytropic star being given a sedov shock. We found that final abundances depend strongly on blast strength and initial abundances. This is hardly surprising, but it is nice to see.

Or, What we would have done given some more time: